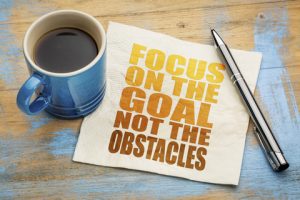 Fear can be paralyzing. It interferes or overtakes one’s thoughts and actions. Fear causes immense stress. People with MS are confronted with it before, during and after diagnosis constantly. After all, there is no cure for MS, no two cases are alike, and it is highly unpredictable in its course.

Even MS Associations who try to portray MS in a positive light often unintentionally create fear due to their messages of “get on a treatment ASAP” or “you need to call your doctor…” Lately, all of the emphasis on cognitive issues causes misconceptions that losing one’s mental faculties is inevitable; or a memory problem such as brain fog is due to MS.

I lived with that fear of the unknown, and with the thoughts of the many “what-if scenarios.” After my first ten years of living with MS, I didn’t fear it anymore; and I still don’t.

• As time went, I realized that the more knowledge and experience I gained, the less fear I had. I got to know my body relative to my own MS patterns and responses, adjusted my lifestyle, and learned how to manage both my MS and my personal life. I felt more in control of my MS; the more control I acquired, the less fear I had. Yes—MS is a manageable disease.

The most common triggers of MS symptoms are stress, fatigue, and temperature/weather changes. Learning how to manage these triggers usually settle the symptoms down and prevent a relapse. By not managing them, they will become chronic which will lead to a flare/relapse.

• Research taught me that statistics were on my side. Here are some major fears, with research to show that they are not as bad as many think:

**It is estimated that 40-50% of people with MS experience mild to moderate impairment; severe cognitive decline like dementia are extremely rare (source: MSIF.org). Check out this MS post—“Are Cognitive Problems Blamed Too Much on MS?”

** Over a lifetime, only 20-25% end up confined to a wheelchair. That was the statistic in 1980, and it probably is less today due to the development of the disease-modifying drugs that have been available since the mid-90’s.” Check out this post “The Truth about MS and Wheelchairs”

**There are more benign cases of MS than publicized. For example, a current starting point is to get specific data on DMT’s from reliable sources. On Page 13 of “The Use of Disease-Modifying Therapies in MS: Principles and Current Evidence” (The MS Coalition– http://bit.ly/1oEnTqY ), the colleagues point out that 50% of persons diagnosed will have “benign MS”. People with benign MS will have an Expanded Disability Status Score (EDSS) 6 and 23% had converted to SPMS.
Read closely, and always double-check hear-say. Another post to read–“Where and how to get your information.”

• Reaching out and accepting support from family, friends and the MS community helps immensely in minimizing stress. My physical, mental and emotional states were significantly improved. I wasn’t alone. Those that really want to help—let them and tell them how.

• Having a focus on overall wellness and health is a priority. When one feels better physically, one will also feel better emotionally and mentally. It is common sense but it’s amazing how many people lose sight of this. In addition, I take all measures to prevent flus, colds, sickness and injuries. These will lead to relapses, thus frequently resulting in MS progression.

• The advancements in research for treatments and a cure have been increasing exponentially. It WILL happen in your lifetime.

• The brain is a powerful organ, and it is gratifying that brain health is finally being addressed. The brain CAN be retrained and repair itself to a certain degree. I had symptoms for years that I no longer have.

I’m an ol’ MS vet, and there are many of us out there. We are folks who have lived and survived MS well for decades, and most would agree with what I just wrote. We know, and we are a positive group. And more positivity will also reduce fear.

It took me ten years to get over my fear of having MS; nowadays, that span of time should be much shorter. After all, it was still the dark ages for both MS and me between 1980 and 1990. Times have changed.